Interviewers often ask people what their favorite books are and why. No one asked, but I’ll tell you anyway.

Without a doubt, my favorite book is Never in Anger: A Portrait of an Eskimo Family by Jean L. Briggs. I bought my copy in 1972, shortly after it was first published. Forty-eight years later, it’s still in print and is considered a classic of ethnography.

Briggs spent 17 months living with a group of Inuit called the Utkuhikhalingmiut in what was then known as the Northwest Territories—now Nunavut—in northern Canada. The people she stayed with lived about two weeks by sled, which meant travel in the winter only, from the nearest permanent settlement, Gjoa Haven, population about 100. The people in the households of “her” village were among the last living more or less in the traditional lifestyle of the Inuit.

She chose such an isolated area for her work because she assumed that people so little contacted by whites were pagans. But she found that although they were still living a nomadic hunting life, they were aware of the greater world and many of the ideas that came with that knowledge, and thereby lay Briggs’s first major problem. She had gone there planning to study shamanism, but most of the Inuit had converted to Christianity. They were ashamed of their “primitive” former beliefs and refused to speak about them.

When life hands you lemons, etc. . . . Since the plane wasn’t coming back for her for a year, she decided to study Utku language and emotion. She was adopted as a daughter by a family consisting of Inuttiaq, the father; Allaq, the mother; and daughters Kamik, Raigili, Saarak, and Quyaq, born while she was there.

It’s hard for me to describe the impact this book had on me. I was an inveterate reader and had read many travel narratives and novels that took place in foreign cultures. Somehow, though, Briggs produced a book that woke me up to the fact that people could have a different way of looking at life than I did, live in different physical surroundings, deal with different problems, and still live satisfying and even happy lives. I learned many things from her book. I’ll write about some more of them later.

I recommend this book to you with one caveat. There is a certain amount of discussion of linguistics. I mostly skip over that. It doesn’t hold me, but the rest of the book definitely does. One of my editors said I shouldn’t talk down linguistics, and I certainly don’t, but it is a specialized interest. And if you’re interested in linguistics, it’s likely that you’re already aware of this book. 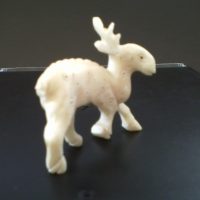