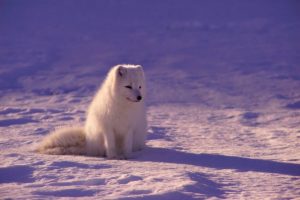 They’re called tiriqaniaq in Inuktitut, the language of the Inuit.

Most have long white fur in the winter, although some are a grayish-blue color. They have short dark fur in the summer. They were an important part of the Inuit economy between the 1920s and the 1970s. The Inuit used the white winter skins to trade for goods at trading posts.

About the size of a large house cat, they’re a maximum of 12 inches tall at the shoulder and weigh between 6.5 and 17 pounds. They have relatively short legs, muzzles, and ears and the thickest fur of any mammal, all attributes that conserve 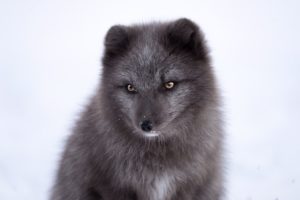 heat. The lagopus in their name means “rabbit footed.” It refers to the fact that the bottoms of their paws are covered with fur as a protection from cold. They’re not bothered by temperatures of -50 degrees Fahrenheit or colder.

They’re opportunistic feeders. They’ll eat almost anything they can get in their mouths, but their favorite food is a small rodent called a lemming. They also eat voles, hares, ringed seal pups, fish, birds, carrion, berries, seaweed, insects, and other small invertebrates.

Red foxes, golden eagles, snowy owls, wolverines, wolves, grizzly bears, and humans prey on them. In spite of their demanding and dangerous lives, though, populations are stable, so they’re not considered endangered.

They normally live three to six years. The vixen can reproduce before she’s a year old. Litters average about five kits, but litters of 20 or more kits are not unknown. 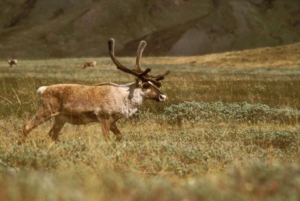 Caribou, tuktu in the Inuit language Inuktituk, live in the far north in North America, Greenland, Iceland, and Eurasia in arctic and subarctic areas. In the 19th century, they lived as far south as Washington, Idaho, and New England. Approximately a million caribou currently live in Canada and another million in Alaska. About a dozen can still be found in Idaho, but they are severely endangered.

Caribou were central to the Inuit economy, and are still important. Their meat was used as food for humans and dogs, their skins for clothing, and their bones and antlers for raw material for tool making.

The wild caribou of the Ungava peninsula, the Leaf River Herd, are forest caribou/migratory woodland caribou. They number about 332,000, and are the only caribou herd in North America not threatened with extinction. They can migrate as much as 3,000 miles a year, the longest migration for any terrestrial animal.

Calves are born in May or June at the end of the northern migration. By the time they’re a day old, they can run faster than the fastest human.

Domestic caribou, called reindeer, are economically important in Eurasia. Wild or domestic, caribou are related to cattle, goats, bison, antelope, camels, and llamas, and like those animals, they chew their cuds.

They eat lichens (especially reindeer moss), willow and birch leaves, sedges, and grasses. When food stressed, they’ve sometimes even been observed eating lemmings, Arctic char, and birds’ eggs. In turn, they are preyed upon by humans, wolves, wolverines, lynx, bears, and golden eagles.

Adults grow to between 33 to 59 inches at the shoulder, and both bulls and cows grow antlers. Large bulls can have antlers measuring as long as three feet.

Great Canadian Wildlife Adventures has an especially good website about caribou at www.thelon.com/caribou.htm.